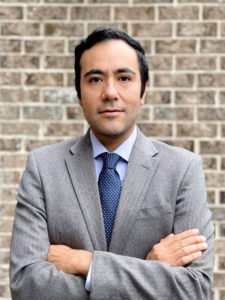 Roach created the CFO position earlier this year as part of a strategy to elevate financial, legal, and human resources functions to the agency’s executive leadership team. As CFO, Husserl will be responsible for overseeing the agency’s budget and finances.

Prior to joining ARC, Husserl served as budget manager for Fulton County, where he developed and managed the budget for the largest county in the state of Georgia and helped manage the county’s COVID-19 response.

Husserl, a certified public accountant, began his career at Deloitte and Touche, where he managed the daily operation for financial audits of public companies, private entities, and governmental and nonprofit organizations. He later served as City Economist for the city of New Orleans.

“Husserl’s background and experience stood out among a competitive list of candidates from across the nation,” Roach said. “He possesses both a terrific attention to detail along with a keen strategic mind needed to develop long-range financial plans that will prepare ARC for the future.”

“Anna is building an outstanding leadership team at ARC that has grown even stronger with the addition of Husserl,” said ARC Board Chairman Kerry Armstrong. “Husserl brings the expertise and experience needed to take our agency to the next level.”

Husserl’s appointment as CFO comes at a critical time for ARC. The federal Infrastructure Investment and Jobs Act, adopted last year, provides significant new funding opportunities to communities throughout the region that are part of ARC’s planning footprint.

“I am excited to join the great team at the Atlanta Regional Commission and collaborate on the agency’s ongoing efforts to enhance quality of life across the region,” Husserl said.

Husserl holds a bachelor’s degree in accounting and finance from Loyola University in New Orleans and a master’s degree in public administration with a concentration in public economic policy from the London School of Economics.